And indeed, while it seems incongruous that anyone buying a ticket to see Crosby, Stills & Nash is utterly unaware of their strongly left-leaning views, those who came strictly for the warm buzz of a hippie-fest nostalgia trip sure got a rude awakening.

Oh yeah, they got the sweet, comfy love songs like "Guinnevere," "Helplessly Hoping," and a nicely done "Our House." And the bong-fest barn burners like "Wooden Ships," "Long Time Gone," and "Almost Cut My Hair." 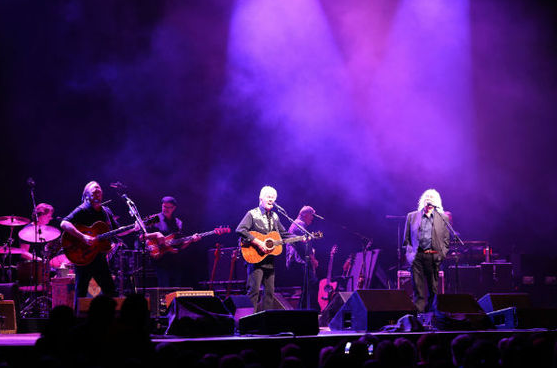 But smack dab in the middle of that set, CSN shook it up with a number of new songs all about some pretty contemporary issues, and one decades-old that could have been written yesterday. Remember, this is three-fourths of the group that recorded and released the protest anthem "Ohio" in about a week after the 1970 Kent State shootings that it was about.

"Burning for the Buddha" addressed the plight of Tibetan monks who have self-immolated as a protest against Chinese authorities. Crosby's "How Can There Be Only One Way?" took on religious superiority and one-uppery. And Nash's "Watch Out for the Wind," completed just four daysago with tour guitarist Shayne Fontayne, was all about the Michael Brown shooting in Ferguson.

Needless to say, in Red State Texas -- even at a CSN show -- his earnest denunciation of local police-force militarization got a tepid reaction. His thrown-in comment about how tough of a job the police have got a much warmer response. Introducing the Crosby/Nash old a cappella number "What Are Their Names?" Crosby said he would offer the crowd just one political opinion.

"The guy with the biggest TV ad budget should not get the keys to the kingdom," he said in almost an exact quote from the previous tour, but adding "And all politicians are pond scum."0

When some dissenter began to yell unintelligibly at him from the back of the auditorium (as concert dissenters are wont to do), Crosby -- not for the first time in the evening -- called the perpetrator out.

"Hey, dipshit! I have the microphone!" he said to applause. "You can't win this one. Not a chance!"

It's shocking that septuagenarians Crosby (73) and Nash (72) still have such strong, flawless and pristine harmonies together. Nash still reaches and hits those high notes. And Crosby, looking slimmer than his days with the Byrds (though sporting a questionable fashion choice of suspenders anda belt) had the strongest, firmest vocal presence of all. Of the three, it was Stephen Stills (69) who showed the most vocal wear, sometimes fuzzily warbling the way through his lead numbers like Buffalo Springfield's "Bluebird," "Don't Want Lies" from his recent collaboration with Kenny Wayne Shepherd as The Rides, and the radio hit "Southern Cross" (um, might be time to retire that one, boys). 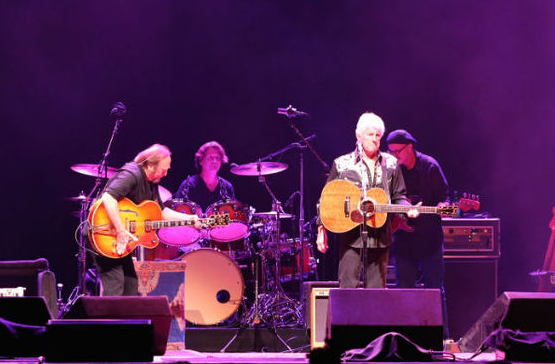 However, the sound worked to his advantage on the Bob Dylan cover "Girl from the North Country," cloaking the lyrics in a melancholy of aged regret that the original did not have. And on guitar (or, as it was, variety of guitars), Stills remains as hot-shit as ever, especially on the solos like the fiery workout from "Wooden Ships."

Deep cuts included "Cathedral" from 1977's CSN, with a spookier new intro than on tours past. And a welcome surprise in the lush, gorgeous, Crosby-led "Delta" from 1982's Daylight Again. The latter, he mentioned, he was urged to complete by Jackson Browne, who took him to Warren Zevon's house to finish the tune. Ah, to have such friends...

The trio were more than ably backed by the quintet of Fontayne, Hammond B-3 organist Todd Caldwell, drummer "Stevie D" DiStanislao (Don Felder, David Gilmour), bassist Kevin McCormick (Sting, Jackson Browne), and keyboardist and Houston native James Raymond. That Raymond is also Crosby's son who he gave up for adoption at birth and only reconnected with after suffering a near-death health scare some years ago, went unremarked onstage.

CSN leave about one-third of their show fluid, so comparing this set list to some from other tour stops, Houston got a number of tunes that other cities have not. Clearly, the trio is still out to challenge both themselves and their audiences, which they did for almost two and a half hours.

The show ended with Stills' familiar (maybe too familiar) non-CSN classic-rock radio staples "For What It's Worth" and "Love the One You're With." Of course, the encore was "Teach Your Children," during which I saw a younger couple actually hold and hug and sway with their excited, bespectacled pre-teen daughter. 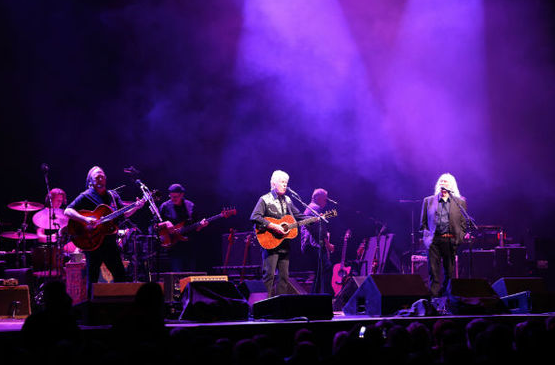 The cynic in me could scoff and talk about overplayed oldies, cozy homilies, and fortune-cookie platitudes. And the mass audience singalong for the final chorus. But, really, whose heart doesn't melt at "Teach Your Children?" Especially if you -- like me -- actually have them? And, as the lyrics go, I know they love me. Until I tell them to clean their rooms.

Personal Bias:In 30-plus years of concert going, I've seen CSN more than any other act. 1986 Southern Star Ampitheatre at Astroworld, anybody?

The Crowd: Mostly sixtysomethings. Grey short hairs vastly outnumbered grey long hairs, though a few legit hippies were spotted. Learned that cell phone video/photo taking douchery is not limited to just younger people, though at least the kids know how to operate their phones.

Overheard In the Crowd: "Tin Soldiers!" (some drunken idiot yelling their request for "Ohio.")

Helplessly Hoping
Girl from the North Country
Watch Out For the Wind
How Could There Be Only One Way?
What Are Their Names?
Guinnevere
Burning for the Buddha
49 Bye-Byes
Wooden Ships
For What It's Worth
Love the One You're With